Animated SVG elements are nothing to be intimidated by. In this write-up and demo we'll learn how to create a smoothly animated SVG icon using widely supported HTML, CSS and JavaScript. See the stand-alone demo here.

First, some basics. SVG, first defined in 1999, stands for scalable vector graphics and is based on mathematical points, rather than pixel units. The main benefits of SVG are scalability and increased independence from rasterized image files (for example: .gif, .png, .jpg files).

Now for the code for creating the animated SVG icon (see the stand-alone demo here).

The HTML and CSS are fairly simple, listed below in Figure 2. Notice the svg and path elements in the HTML are based on XML syntax. The svg element sets the bounds of the element and the path is a line composed of points. The "d" attribute of the path element stands for "description". The "M", for "move to", in the value of d represents the x and y coordinates where the path will begin. The CSS sets the size of a div containing the svg, and rotates that div continuously around its center in 2 second periods.

The JavaScript, listed below in Figure 3, controls the animated length of the path element. As shown in Figure 1 above, the path is actually composed of many 5 degree arcs arranged adjacent to one another. The arcs, or radians, listed in the "d" attribute of the path element are converted to an array. This is done to more easily add and remove radians from the path.

That's it! I hope you enjoyed this write-up, and please share it if you found it useful.

With many distractions already present in a developer's life, why commit to memory and type the same commands everyday? Automate it with shell scripts instead!

This write-up will show you how to use a shell script to easily open your editor, a local server and your dev environment in a browser. Essentially, run one command instead of many.

We'll look at each of the three commands. Then we'll put it all together into a shell script file.

First, let's start the server and database for my local build. I use the application XAMPP for that. Simply substitute your own server in the following command if it isn't XAMPP:

Next, let's open the root folder that contains the project's code in our editor of choice. I like using the Atom editor, made by Github, but substitute the name of your favorite editor below:

Lastly, let's open the URL for the development version of our project:

Good so far, right? Great.
Let's combine the above three commands into a shell file because we want to run all three with one convenient command.
Open your editor and paste the following into a new file named startDev.sh:

To run this all-in-one script run the following command while in the same folder where you put startDev.sh:

Ever find it frustrating to debug touch events while developing for touch enabled devices? I have!

To help cope with the inaccessibility of mobile browsers' console object, I built a custom debugger component.

Tooltips with HTML, CSS and JavaScript

The stand-alone demo can be found here.

Figure 1 (below) shows what our tooltips will look like based on a basic HTML, CSS and JavaScript implementation outlined in Figure 2 (also below).

The HTML, CSS and JavaScript provided in Figure 2 (below) are fairly straightforward.
A couple of things to note about the JavaScript:
- It is concise, native JavaScript and does not rely on any frameworks.
- Supports touch events for mobile devices, as well as ensures the tooltips are not hidden offscreen.

I really hope you enjoy the write-up and the tooltips!

See the Pen NAkBQy by Michael McCarthy (@pixelOneZero) on CodePen.

Make a Depth of Field Effect with CSS Animation

It turns out that simulating depth-of-field with HTML and CSS is surprisingly easy. That's right, HTML and CSS, and no JavaScript. The full demo can be seen here.

There are two approaches described in this article. The first approach, shown in Figure 1 below, uses two transparent PNGs. One PNG serves as the background (i.e.: things far away from the camera), the other PNG, for the foreground, is absolutely position on top of the background image. Then a CSS blur animation is applied to both images with two selectors. Two selectors are required to create the alternating blur and focus between the two images. When the foreground is in focus, the background is blurred and vice versa.

The second approach to creating depth-of-field uses SVG clip path to define a polygonal shape to blur. In Figure 2 below, the SVG clip path, outlined in orange defines a foreground area to which we can apply the CSS blur selector for an animation.

Each approach is functional in modern browsers. It is worth noting that the second approach, with SVG, is more performant. This is because one image is used and that image is a JPG, much smaller in file size. The other approach uses two PNGs, significantly larger in size. Thanks reddit user tjuk for pointing this out!

In the final article of a three part series dealing with JavaScript arrays, we review the Array.prototype.reduce() function.
(The first two articles can be found here: Part 1 and Part 2)

Array.prototype.reduce(), added in ECMAScript 5.1, is useful for efficiently aggregating values based on array element properties.
The callback structure of reduce() provides a callback function that has access to an array, and is regarded as more elegant than a traditional JavaScript 'for' loop.

Here is an example of Array.prototype.reduce():

Purpose: Returns an aggregate value corresponding to elements in the input array.

Previously we saw how the filter function can remove duplicate array elements.

Another quite useful JavaScript array function, also introduced in ECMAScript 5.1, is the map function.
Array.prototype.map() provides an elegant way to make a new array whose elements are transformed versions of elements in an original array.
You will commonly see the map function offered as an improved alternative to the traditional JavaScript for loop.

Purpose: Returns an array of transformed elements corresponding to elements in the input array.

Inside the callback function, we use indexOf to return only a single instance of an element value (even when values are repeated in the array).

Here is a custom context menu that is an alternative to the default 'right click' browser menu.

The custom menu displays when the "contextmenu" DOM events occurs.

Check out the stand-alone demo here.

Here's a little UI component I just wrote for a switch (inspired by Apple's widget).

You can customize it easily with colors, border-radius, etc.

Check out the stand-alone demo here, and view source for the html, css and JavaScript.

Here's a simple technique to help you spot your console debugging. Simply precede the logging message with '%c' and pass the log style you want as a string of CSS to the console.log function. Like this:

If you are using Chrome or Firefox you'll be fortunate enough to see this: 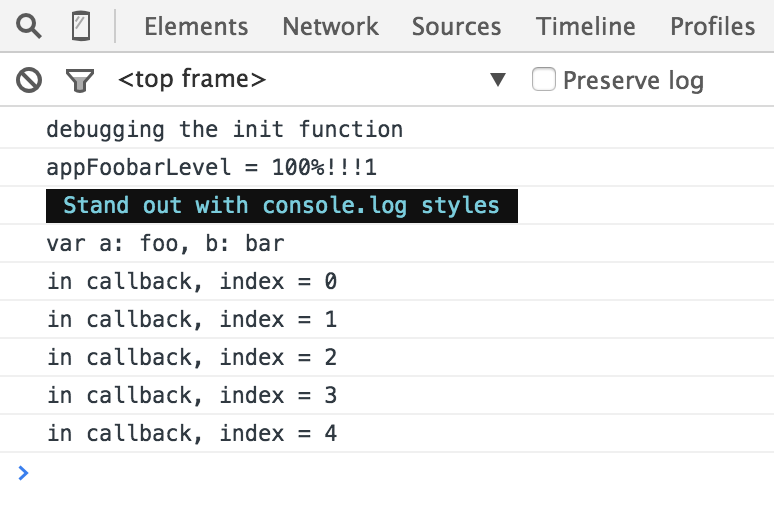 Here is a straight forward way to make a card flip animation with HTML and CSS only.
When a user hovers over the element, the CSS :hover styles do the magic.
It even works for touch devices.

Here is the HTML:

Here is the CSS:

The HTML character reference chart has just been added to help you find those tricky-to-remember encodings.

Check it out here

Sometimes it can be easy to lose track of which responsive CSS styles are being applied in a responsive design.

Here is a simple way to add a debugging message to remind you of the current breakpoint. It makes use of the
::after CSS pseudo-selector to append the current media query that is evaluating as true. In the case of this demo,
the ::after content updates based on the current max-width of the viewport.

(Make sure to also click here to see the full demo. Resize the window to see the debugging message update):

Want to build an interactive parallax like the iOS app icons that shift perspective?
It's easier than you might think.

Thanks to the HTML5 device orientation API you can build it.

Here's the demo (click here to see it in a full window):

Here's the CSS and HTML:

What's the most commonly used code you've needed as a developer?

Oh the excitement of seeing a red dot with a number in the middle!
It's telling you: You have email, you have chats to read, you have online stuff to check out!

With the massive popularity of iOS, Facebook and LinkedIn comes the associated design conventions, and the
shrinking count notification is one of those UI features.

Here is an obscure, but useful unicode character I found this morning, for representing the ubiquitous mobile navigation icon (a.k.a.: the "hamburger" icon):

Hopefully you are using a web browser capable of rendering that symbol. If you can't see it, it's simply the standard three, stacked, horizontal lines.

While on the topic of unicode; two comprehensive lists of unicode characters:

Click the navigation icon below to start the animation.

Here is the HTML

Here is the CSS

Lastly, here is the JavaScript